The role of the cerebellum in the coordination of smooth movements is well established. More recently, multiple lines of evidence have implicated this critical brain region in perception, emotion and cognition, via its extensive connections with cortical and subcortical centers.

Impairment of the cerebellar circuitry has been linked to the development of numerous motor and non-motor diseases, including ataxia.

The cerebellum is an intricately ordered structure, containing more neurons than any other brain region. Central among these are the Purkinje cells. 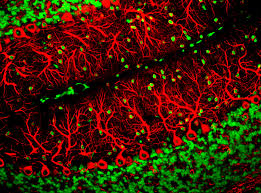 Dissecting the molecular mechanisms underlying this vulnerability requires a suitable model for the study of cerebellar development and degeneration. In the case of humans, brain tissue from affected individuals is difficult to obtain and is typically acquired postmortem, offering only limited insights into an advanced stage of pathology. Mouse models, on the other hand, can be studied throughout development. Nevertheless, they are hampered by species-specific differences in brain structure and gene function, which may affect the interpretation of results.

A big breakthrough in the field of human neurodegenerative disease research to date has come in the form of induced pluripotent stem cells (iPSCs). These cells can be derived directly from patients carrying disease-causing mutations. Importantly, they also have the potential to differentiate into any cell type of the body, offering the unique opportunity to study human neurons in vitro without the need for invasive surgical techniques shedding light on the pathology of numerous neurodegenerative diseases, including several of the spinocerebellar ataxias.

However, studies of cerebellar neurons remain remarkably rare, largely due to the complexities of development and neuronal architecture.

The authors describe a simplified method for the reproducible generation of Purkinje cells from human iPSCs, enabling investigations into disease mechanisms and therapeutic development using disease-relevant patient cells. Past approaches to differentiate cerebellar neurons from hiPSCs have proven lengthy, technically challenging and difficult to reproduce, and it is the author’s hope that continued innovations, such as the simplified protocol described here, may make these models more accessible, in order to enable future advances in the field.